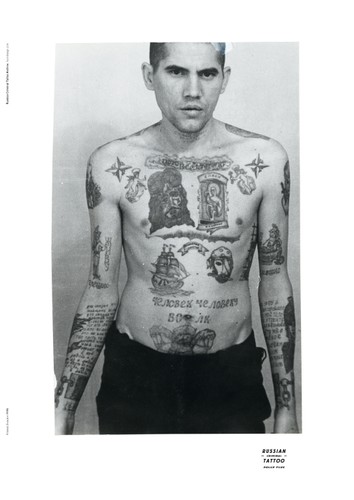 Text on the stomach reads ‘Man is wolf to man’. Text across the arms reads ‘Live in sin, die laughing’.

A pirate with a knife in his teeth is often accompanied by the acronym ‘IRA’ (a Russian female name) written on the knife, which stands for Idu rezat aktiv (I’m off to kill the activists). Worn by otritsaly (prisoners who refuse to submit to the prison rules) it denotes an inclination to brutality, sadism, and a negative attitude towards activists – prisoners who openly collaborate with prison authorities.