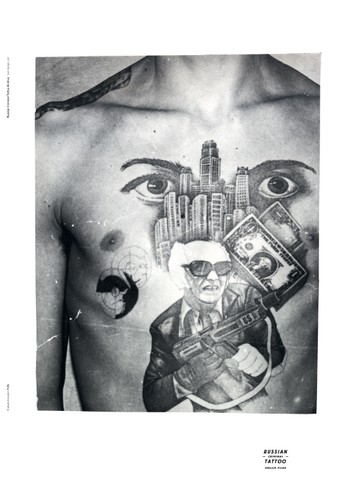 The man is a character from a TV crime series shown during the Soviet era - a brutal gang leader. In the story, he ends up in jail. In this tattoo, however, he defends himself against the Soviet power and fights back. On his submachine gun are the letters 'US' which along with the skyscrapers and dollar bills embody the ideological opponents of the Soviet Union and indicate a hatred of the government.

The eyes signify that ‘I am watching over you’ (the other inmates in the prison or camp). The epaulette tattooed on the shoulder denotes the inmates 'rank' among the criminal caste.