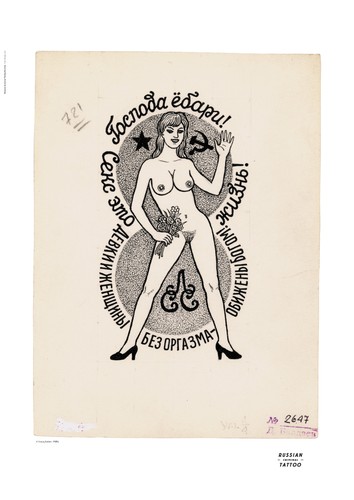 Text at the top reads ‘Gentlemen fuckers, sex is life!’. Text at the bottom reads ‘Girls and women who don’t have orgasms are godforsaken!’. The monogram ‘LSS’ between her legs stands for Lyublyu SuperSeks: I love super sex.

The tattoo of a woman sentenced for hooliganism under Article 206 of the Criminal Code of the RSFSR. She was detained along with other homeless people in a railroad depot. The tattoo was made in a Corrective Labour Camp for Women in Komi ASSR by an inmate who had formerly been an art student in Moscow.