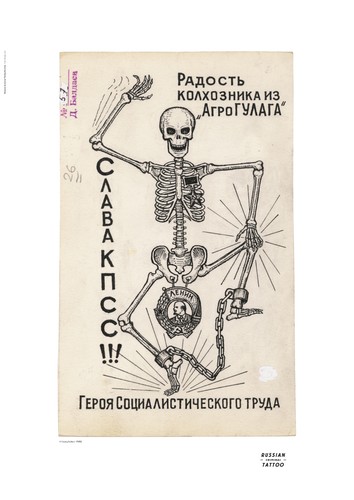 Text on the left reads ‘Glory to the Communist Party!!!’. Text at the top and bottom reads ‘The joy of a farmer from AgroGulag, the Honourable Worker of Socialist Labour’. Text on the award reads ‘Lenin’.

Caricature of the Communist Party. The tattoo of an otritsala (a convict who refuses to submit to any kind of authority), who was frustrated with the length of his sentence (nine years). He was caught stealing food and gasoline from akolkhoz (collective farm) warehouse. According to the bearer, the tattoo symbolises ‘a kolkhoz farmer after paying taxes to the government’. Another popular interpretation is: ‘I turned in the meat, the skin, the fur, and the balls. Now I’ll just turn in my bones for recycling and that’ll be it.’ Variants of this tattoo depicting a skeleton were popular in the 1950s and 1960s among convicts opposed to the Communist Party.